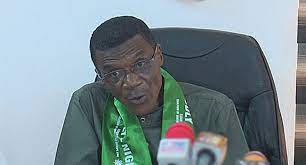 The Coalition of Northern Groups (CNG) has labelled the Pan-Yoruba socio-cultural group, Afenifere, a terrorist organisation, calling on the Federal Government to immediately proscribe it as well as other cultural tribal organisations undermining the peace, security and peaceful coexistence of the country.”

In a statement issued on Monday by Abdul-Azeez Suleman, CNG’s spokesman, the Northern Coalition said any organisation or individuals associated with groups that incite others to violations or openly support acts of terror and terrorist movements should be arrested and decisively dealt with by the authorities.

Part of the statement reads;

“The CNG emphatically repudiate the provocative action of remnants of those who harbour pent-up grudges against the rest of Nigeria for the failure of Awolowo’s tribalistic ambition to secure the nation’s leadership, and deem this affront.

“The CNG unequivocally declare that groups like Afenifere and other organisations who go about making inciting statements to undermine the corporate existence of Nigeria are terrorists organisations and we call on the Federal Government under the able leadership of President Muhammadu Buhari, to recognise them as such and proscribe them with immediate effect

“We have noticed, sadly, that Afenifere has, over the years, constituted themselves into a nuisance by always making statements capable of throwing the nation into chaos and anarchy and the government should rein them in and curb their excesses.”