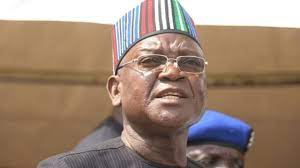 Governor Samuel Ortom of Benue State has accused the administration of President Muhammadu Buhari of a hidden agenda to fulanise Nigeria.

He alleged that the president was in support of the activities of Fulani herdsmen who were terrorizing citizens, and killing people in efforts to chase them from their ancestral lands.

The governor spoke on Tuesday during an interview on Channels Television, where he also lamented that Buhari was not the first Fulani man to rule Nigeria, and asked why his administration was different in condoning the atrocities of Fulani herdsmen.

Ortom said, “Because of the body language of President Muhammadu Buhari, Miyetti Allah has been killing our people. My citizens have sent me to tell the President that they don’t want open grazing.

“The Presidency is aware of the atrocities of the Miyetti Allah because I alerted them of the threats being issued by the Fulani herders but nothing was done.

“President Buhari told me to tell my people to learn to live with their neighbours; neighbours with AK-47s who kill and pillage our people; I have alerted the Presidency several times, but Miyetti Allah is always in Abuja with the President, being protected with taxpayers’ money.”

Regarding the stance of the Nigerian Governors’ Forum on open grazing, Ortom noted that his position is widely known amongst his colleagues.

“I have made my position known to the NGF but I am just one governor; the southern governors resolved over what should happen but they were castigated.

“The position is known with the support of most of the northern governors but most of them are afraid to confront the matter due to the fear of the EFCC. The presidency is frustrating the efforts of the NGF regarding the issue of open grazing.”

Ortom further lamented that he has been blocked from seeing the president by his handlers, to present the plight of his people to Buhari.