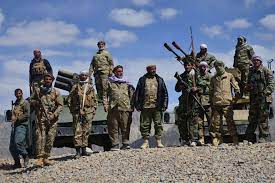 The National Resistance Front of Afghanistan (NRF), an anti-Taliban resistance group, has declared that it is prepared to fight the armed gang which has taken control of the country.

Taliban took control of Kabul, Afghanistan capital, on August 15 following the withdrawal of US troops and subsequent escape of the country’s president.

The armed group is currently working towards forming the new government in the country.

In an interview with BBC, Ali Nazary, head of foreign relations for NRF, said the group is ready for battle.

He said the group wants to pursue peaceful negotiations but if that fails, they will not be afraid to fight.

NRC based in the Panjshir valley in the north of the country is the last state yet to fall under the control of the Taliban,

But the Taliban has said they were sending hundreds of their fighters to the region to take control of it.

The Panjshir valley and wider Panjshir region is known for having successfully fought off multiple invasions, including several from Soviet forces during the Soviet-Afghan war from 1979 to 1989, and the Taliban in the 1990s.

The NRF controls the region and since the fall of Kabul, Amarullah Saleh, the former vice president who claims to be Afghanistan’s “caretaker president,” has been building up a resistance against the Taliban in the Panjshir valley.

The BBC said on August 20, a video accessed by Republic TV showed scores of Afghan soldiers traveling to the valley, apparently to join the Northern Alliance resistance movement.

“The NRF believes that for lasting peace we have to address the underlying problems in Afghanistan,” Nazary told the BBC.

“Afghanistan is a country made up of ethnic minorities, no one is a majority. It’s a multicultural state, so it needs power sharing—a power-sharing deal where everyone sees themselves in power.”

He warned that having a one group dominating politics will lead to “internal warfare and the continuation of the current conflict.”

Nazary said the group had “thousands of forces ready for the resistance.”

“And we’ve proven ourselves, our track record in the past [40 years] has shown that no-one is able to conquer our region, especially the Panjshir Valley.

“The Red Army, with its might, was unable to defeat us… I don’t think any force right now in Afghanistan has the might of the Red Army. And the Taliban also 25 years ago… they tried to take over the valley and they failed, they faced a crushing defeat.”

NRF leader Ahmad Massoud, the 32-year-old son of Ahmad Shah Massoud, one of the main leaders of Afghanistan’s anti-Soviet resistance in the 1980s, wrote a column in the Washington Post on August 18 appealing for help from the West.

Ahmad Shah Massoud, a famed resistance fighter against the Taliban, was assassinated at the behest of Al Qaeda and the Taliban in the north-east of Afghanistan on September 9, 2001, two days before 9/11.

Reports on Friday said that resistance fighters had recaptured three areas of the country’s Baghlan province from the Taliban.

The latter captured the capital and largest city of that province, Pul-e-Khumri, on August 10 as part of its rapid takeover of territory throughout the country.