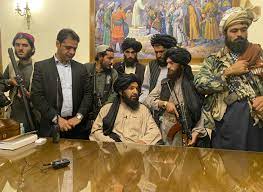 A senior member of the Taliban on Tuesday announced a general “amnesty” for everyone in the country and urged women to join the government, days after the Taliban takeover of Afghanistan.

Enamullah Samangani, a member of the Taliban’s cultural commission, claimed on Afghan state television that women in Afghanistan had no reason to be afraid.

He said: “The Islamic Emirate doesn’t want women to be victims.” He added: “The structure of government is not fully clear, but based on experience, there should be a fully Islamic leadership and all sides should join.”

Samangani said that women “should be in the government structure according to Shariah law”.

Associated Press reported that this marked a departure from the last time the Taliban was in power when women were largely confined to their homes. And those who violated the Taliban’s rules faced flogging in public and execution.

In an earlier statement, the Taliban spokesperson Sohail Shaheen said that the reports of girls being sent home from schools in some parts of the country were not true.

Fawzia Koofi, a women’s rights activist and former lawmaker was quoted by NBC as saying “women in Afghanistan are the most at danger or most at-risk population of the country.”

Another Afghan woman, Nasreen Sultani, the principal of the Sardar-e-Kabuli Girls High School in Kabul was quoted as saying: “I am very sad. When I see all these girls, I get really upset now.”

She added: “I tried, but we couldn’t manage to make sure that women get out of this miserable situation,” Ms Sultani was threatened by the Taliban in the past.

It was also not clear what the Taliban meant by “amnesty”.

Other Taliban leaders have said that they won’t seek revenge on those who worked with the Afghan government or foreign countries, but there have been reports of recriminations already taking place.

Afghanistan faces massive uncertainty with the Taliban now in control of the country. Former president Ashraf Ghani fled the country on the day the group took over the presidential palace.

There was subsequent chaos and fear among many Afghan locals. Hundreds ran towards the international airport in Kabul and several clung to the wheels of a departing US military aircraft.

One disturbing video that was circulated online showed a few men falling to their death once the aeroplane took off.