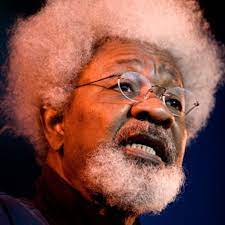 Speaking to BBC Pidgin on the state of the nation on Monday, Soyinka said this became necessary as the state of mind of vast sections of the country mentally, spiritually and economically was that of total distrust for the government.

“There’s only one thing to be done to try and win the trust of the people, and in political terms, it’s called Government of National Unity as an interim measure. That’s all.

“Interim measure, especially, towards the next election, in order to have a continuing confab among those who execute policies, in order to regain, of course, basically, a sense of participation, of involvement of the people.

“I know it’s a very hard pill to swallow, but as I said, it’s an interim thing. During that process, you’ll structurally examine the constitution.

“Okay, I know they’ve been tinkering with it here and there, but we’ve been going through that for ages, there have been constitutional review committees under various regimes.

“And sit down, admit your inadequacy, because this has become glaring over the years, even before the last elections.

“I’ve said over and over, I’ve spoken out on it very privately and very frankly to even members of the ruling party.

“The distrust is too deep and it’s only a confab, through a Government of National Unity, as an interim measure, that can actually suggest or offer a sliver of hope for the continuity of this nation.”

He said so much damage had been done in the past few years through some “centralist” and “sneaky” policies of the government such as the RUGA and the Water Resources Control Bill.

Soyinka also criticized the manner of the re-arrest of the leader of IPOB, Nnamdi Kanu and the raid on the home of Yoruba Nation agitator, Sunday Igboho.

He said although no past president had been without acts of constitutional breaches, the incumbent had a responsibility to remedy the situation.