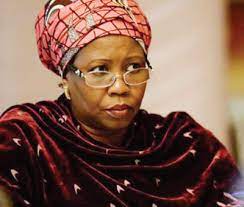 The Minister of State for Industry, Trade and Investment, Ambassador Maryam Katagum, was on Monday, rushed to the Trauma Centre of the Abubakar Tafawa Balewa University Teaching Hospital (ATBUTH) Bauchi, after she reportedly slumped at an official event in the state.

The Minister was in the state to inaugurate an empowerment programme at the NAADI office, Sani Mallam Shopping Plaza, when she was said to have suddenly collapsed while she was delivering her speech.

It was gathered that the Minister who is from Katagum local government area of the state, had featured in a live programme on Globe FM radio on Sunday and also had other personal engagements in the state.

Reports quotes an eyewitness who was at the event as saying that when Katagum got to the venue of the event, she looked withdrawn and touched her head occasionally as the programme went on, indicating that she may not have been feeling well.

“She (Katagum) just held her head and went down flat. Her aides and other officials quickly intervened and rushed her to the hospital,” the eyewitness said.

At the Trauma Center where she was rushed to, a medical officer who did not want his name mentioned said she was in a stable condition.

“The Minister is in the Trauma Centre and in a stable condition.

“There’s a section of the hospital that is an exclusive area, more like a VIP section, that is where she is. She was admitted to the Trauma Centre and is on admission there.”