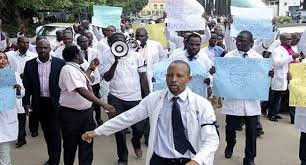 The National Association of Resident Doctors (NARD) on Monday resumed its industrial action over unpaid salaries and benefits.

Reports from some government owned hospitals across the country showed that they have downed tools, leaving patients to their fate, even as other health workers try to fill the gaps.

The doctors are also demanding the immediate withdrawal of a circular removing House Officers from the scheme of service, in government-owned hospitals.

The doctors had also embarked on an earlier strike in April, leaving many patients unattended across government-owned hospitals in the country.

The strike was suspended about 10 days later after they met with Federal Government representatives.