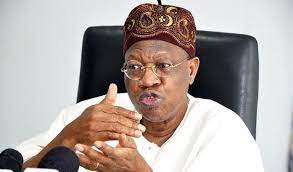 A group, Arewa Youth Frontiers for Good Governance (AYFGG) has chided Minister of Information and Culture, Alhaji Lai Mohammed, for calling the Governor of Kwara State, Abdulrahman AbdulRazaq a “one chance governor.”

The minister, during the unveiling of a factional All Progressives Congress (APC) secretariat in Ilorin recently, said he regretted supporting AbdulRazaq.

“It was immediately after the governor emerged as the party’s candidate for the election that it dawned on us that we had entered ‘one chance,” he had said.

But speaking at a press briefing in Abuja on Sunday, the National Coordinator of AYFGG, Mohammed Hussaini, said it was unfortunate such a degrading comment came from a minister and a leading figure in the party.

Lai’s ire was provoked because the governor has refused to dance to his tune and the political stakeholders have denied him the role of a kingmaker in Kwara State, he said.

Hussaini urged the minister to focus on the national assignment given to him instead of seeking relevance in Kwara politics.

He said AbdulRazak should be supported as he unprecedentedly transforms the state, instead of being distracted.

“We are not surprised at the vituperation of Lai Mohammed because we knew that since the coming of the Abdulrahman’s government in Kwara State, the kingmaker role he expected to regale in did not come simply because Governor Abdulrahman has refused to dance to his tune or regard him as a kingmaker,” he said.