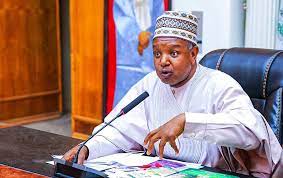 Governor Atiku Bagudu of Kebbi State has given his own perspective about the stand of the Southern governors on 2023 presidency.

At a meeting they held in Asaba, Delta State capital, two months ago, the governors had said their region must produce the next president.

Different stakeholders have been reacting to the development.

In an interview with BBC Hausa Service, Bagudu shared his thoughts on the issue.

He also spoke on the insecurity in the  country, the ruling party and other issues.

Below is the interview.

Southern Governors had unanimously resolved that the south should produce the next president come 2023. What’s your take on that?

Being chairman of the APC Governors’ Forum chairman, I won’t say my mind but I think people should understand the history as to how leaders were produced in 1999, it was done through unity. PDP and APP were the major political parties at the time. Alex Ekwueme and Obasanjo were the aspirants under PDP, and Obasanjo carried the party’s flag. For us in the APP, we entered an alliance with AD, it produced the presidential candidate in Olu Falaye while APP produced his running mate, Umaru Shinkafi. That arrangement produced both candidates from the South West, and that’s how the region ruled for eight years.

So, politics is all about unity, understanding, wooing and respecting people and that’s what we’re playing out in APC now. So, instead of issuing statements, there’s a need for everyone to embark on wooing voters to every part of the country. Here is our candidate who could bring peace and prosperity to the country. And a candidate that can continue with the legacies laid by the Buhari presidency which is void of greediness and nepotism, that’s the kind of leader who can sustain peace in our country.

So, you’re with the view that everyone should contest and allow people to decide?

That is what I meant by saying that I won’t state my stand being me in leadership of our forum. I am going down memory lane on how we successfully reached a consensus at that time (1999). In democracy, someone who has ambition should rather talk and he should muster confidence for people to repose the same in him.

2023 elections are fast approaching, and people are thronging into your party. What are the challenges you foresee?

Power belongs to God, and if we’re looking for it let’s do it the He wishes and He stipulated the terms. These are the things President Buhari is always trying to the best of his… and most of us are emulating him in that regard and the oath we took. So, these are things that attract others into joining our party. Despite the many global and national challenges that bedevil us today; there’re a number of infrastructural developments that our party brought in for the betterment of the country. Our party continued with all the projects it inherited such as rail lines and airports construction.

All those Senators and Governors who join us are saying that they’re joining APC out of the party’s landmark achievements particularly the trustworthiness of President Muhammadu Buhari.

Don’t you think that the rush into your party could create problems?

No, no at all. We would like one day that all Nigerians join us as one party which will bring understanding among us. Even if it’s one party, there should be elections for party leaders and the political leadership for the nation. So, this could even reduce conflicts and lead to having understanding each other and to face our challenges squarely.

Whilst stating APC’s achievements, you kept mum on the security challenges?

Whoever is from the North East, especially the governors, are saying there’s significant improvement in the security situation. Most people have been returned and some are returning to their homes and towns and now engaged in farm activities. And in the far South, when we came to power there had been issues here and there in the region; now peace has been restored. In the North West, most hitherto no go areas, they’re now accessible and people are going by their farming activities. Though, there are still some places that remain but we’re making gains through cooperation and logistics.

The way you’re gathering in welcoming defectors, one would be tempted to say as to if you’re more focused on party politics whilst people are being killed?

No, we’re not doing that out of lack of empathy to the plights of the people. Though, that one too is an important thing; it happens that a certain political party is more interested in respecting people coming into it and some party isn’t perturbed on that at all. Anything that can bring people together could douse the crisis and tensions. So, when a governor or some important figure joins our party it is another milestone towards bringing peace. We had a similar experience too, as a governor left our party and joined another.

We are going to receive the newcomers with consent of the electorates. Kebbi State people are happy to see me welcoming people into APC for they can join our team to foster development in their states and that can help in building peace. Even if all the governors come to APC, it’s still a remarkable success/achievement.

In the forthcoming general elections; are you interested in contesting any office?

I have not sought for any position yet and I am not vying for one. But if Allah destines any office to me, then Alhamdulillah. Though, I’ll keep advising my party and office holders.