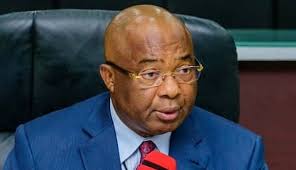 Governor Hope Uzodimma of Imo State on Wednesday explained the reasons the state’s residents did not comply with the sit-at-home order by the proscribed Indigenous People of Biafra’s (IPOB).

The governor said only a constituted authority like his government could give order on when people should stay away from their work or businesses.

Uzodinma spoke while fielding questions from State House reporters after a meeting with President Muhammadu Buhari at the Presidential Villa, Abuja.

“Most people in Imo are businessmen and women who depend on their daily activities and income to feed their families. So, they cannot afford to sit at home idle and allow hunger to ravage the state.

“Southeast has a pan-leadership organization, which is in charge of culture and social activities, Ohanaeze Ndigbo.

“So, I don’t want to speak for them and I know in Imo State, there is only one Governor and only the governor can order, working with other members of the government, that people should sit at home and it will be obeyed.

“I don’t want to sit here and recognise that there is any order outside the government of Imo State because there is a government. IPOB is not a government in Imo State. The state government has not authorised anything at all. And like I did say a few minutes ago, in Imo State, people are going about their businesses. Workers are going to work and normal business activities are ongoing. And for now, I told you that Imo State is relatively calm.

The governor, while speaking on the forthcoming governorship election in Anambra State, expressed optimism that the All Progressives Congress (APC) would win the election.

“You know our President. You know him (Mr President), he will only encourage you. He doesn’t interfere. We are in charge of the campaign.

“I’m the chairman of the campaign council. And the good news is that the political leadership in Igbo land has resolved to be part of the federal government, to participate at the national level, to live the provincial championship to national championship.

“So, what we have decided to do is to ensure that we embrace the ruling party, the APC. And we are taking the message to Anambra.

“And by the grace of God, Anambra people will buy the message and Igbo land will be recovered,” he said.