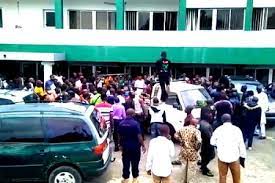 More than 20 corpses were on Wednesday dumped at the main gate of Plateau State Government House following an attack on Yelwan Zangam village in Jos North Local Government Area of the state.

The protest by hundreds of angry youths was the aftermath of Tuesday’s night attack on Yelwan Zangam, a community inhabited by the Anaguta ethnic group in the outskirt of Jos, the state capital.

There are many versions of the night raid which community leaders said claimed 37 lives.

Families of some of the victims said the attack was launched by herders but leaders of the Fulani in Plateau State debunked the claim.

Some people said the attack might not be unconnected to a land dispute between residents of Yelwan Zangam and a neighbouring community, Yelwan Mista Bow.

While police authorities in Plateau have confirmed the attack, they have not given details of the actual number of people killed and the suspects behind the act.

However, the angry youths and women who staged a protest on Wednesday wailed and called for justice but security agents prevented them from accessing Plateau’s seat of government.

The people of Yelwan Zangam had earlier moved corpses of the victims to Plateau Hospital to deposit them in the mortuary.

However, some angry youths stormed the hospital, packed the remains into pickup vans and moved them to the State House of Assembly.

Thereafter, the youths transported some of the corpses to Little Rayfield and lined them up in front of the government house.

The victims include men, women and children.

Residents of Yelwan Zangam said the attack on their community was carried out by herdsmen who killed 37 people and set many houses and vehicles ablaze.

However, the Police spokesman for Plateau State Police State Command, ASP Ubah Gabriel, and that of Operation Safe Haven (OPSH), Major Ishaku Gaji, only confirmed the attack but said details of the incident would be communicated later.

As of the time of filing this report, no official casualty figure has been released but Yakubu Bagudu, a resident of Yelwan Zangam and the son of the traditional leader of the village, stated that they counted 37 corpses.

He said: “Some of the victims were burnt in a house where they were taking cover in the home of the community leader.

“The community leader is alive but my brother was killed in the incident.

“My house and my car were burnt too. For now, there is an allegation the attack was launched by Fulani herders.”

But the Chairman of Gan Allah Fulani Development Association of Nigeria (GAFDAN) in Plateau State, Garba Abdullahi Muhammed, debunked the allegation, saying the attack was not carried out by the group.

He said: “This has been a frequent accusation when a community is attacked. We are often blamed for any attack but it is not true.

“What is the evidence that shows the attack was carried out by the Fulani? We condemned the attack and call on the security to investigate the matter. People can hide under the banner of Fulani to attack and tomorrow, Fulani group would be blamed,” he said.

The incident in Yelwan Zangam occurred 10 days after 27 travellers from Ondo and Ekiti states were killed along Rukuba Road in the same Jos North LGA.

The incident had caused serious tension in Jos and parts of Bukuru metropolis in Jos South LGA but was quickly brought under control by security operatives and community leaders.

Meanwhile, Plateau State Government yesterday re-imposed the 24-hour curfew earlier relaxed in Jos North and said 10 suspects have been arrested in connection with the attack on the Yelwan Zangam community.

Governor Simon Bako Lalong had earlier called an emergency security meeting over the incident where he condemned the attack and warned that criminals will be pursued, arrested and dealt with, no matter how long it takes.

In a statement by his Director of Press and Public Affairs, Dr Makut Simon Macham, the governor described the attack as barbaric.

He said security personnel have been directed to intensify efforts in tracking down other assailants and their sponsors to bring them to justice.

Lalong, who said his administration will not allow the reign of terror to persist and rubbish all the investments made in restoring calm in the state said that he was furious over the incident which security reports indicate was carefully planned.

“The bridge linking the village was said to have been destroyed to deny security forces access to the area during the attack,” the statement reads.

He said the proactive decision in re-imposing the curfew became necessary following the threat to lives and properties within the LGA and the need to forestall the breakdown of law and order.

“It will also enable security agencies to deploy appropriately to maintain security as the search for the attackers of the villagers continues,” the statement said.

Plateau government has said it will shoulder the responsibility of burying those killed in the Yelwan Zangam community as well as others the state could access.

This followed the dumping of corpses at the State House of Assembly and the Government House.

The Commissioner for Information and Communication, Dan Manjang, said that government will carry out the burial accordingly, adding that the dead would be taken to their respective communities for interment.

Earlier while addressing the angry youths at the premises of the assembly, the Speaker, Ayuba Abok Izam, called on the youths to exercise restraint as the government would do everything possible to address the problem.

“We are all affected by what is happening in Plateau, but please, calm down as the government is doing everything possible to end the killings. We are your representatives, we are going to follow up with relevant authorities to ensure that peace returns to the state,” he said.