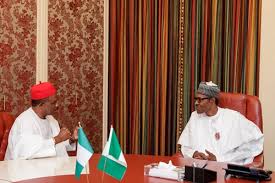 Governor Willie Obiano of Anambra State says the possibility of the declaration of a state of emergency in his state is not an idea of President Muhammadu Buhari.

The governor said this Wednesday while speaking with state house correspondents after meeting with president in the Presidential Villa, Abuja.

He said the Minister of Justice and Attorney-General of the Federation, Abubakar Malami, had been reported to President Buhari over the issue.

Obiano, who promised to call the Attorney General to express his mind to him over the suggestion, said apart from the recent security crisis, Anambra had been the most peaceful in the south east.

The governor also countered the statement that members of the ruling All Progressive Grand Alliance (APGA) in the State House of Assembly had defected to the All Progressives Congress (APC).

He claimed what happened was that the members who were given N100 million each to join the APC had, however, remained in APGA.