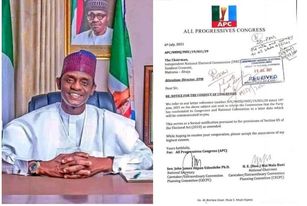 The ruling All Progressives Congress (APC) has postponed its congresses from ward to national level, indefinitely.

This was contained in a letter dated July 6, 2021, addressed to Chairman of the Independent National Electoral Commission (INEC) and signed by the Chairman and Secretary of the APC Caretaker/Extraordinary Convention Planning Committee, Governor Mai Mala Buni and Senator John James Akpanudoedehe.

“We refer to our letter reference number APC/NHDQ/INEC/19/021/20, dated 10, June, 2021, on the above subject and wish to inform the Commission that the party has rescheduled its congresses and national convention to a later date which will be communicated to you.

“This serves as a formal notification pursuant to the provisions of section 85 of the Electoral Act (2010) as amended. “While hoping to received your cooperation, please, accept the assurance of my highest esteem,” the party said.

The recently released APC timetable and schedule of activities by the party’s Director of Organization, Professor Al-Mustapha Ussiju Medaner, showed that the congresses were to commence with the sale of nomination forms for the ward congress from 1st and end by 7th of July, 2021.

The party also fixed inauguration of Ward/LGA Congress Screening/Screening Appeal Committees for 10th of July 2021. Ward Congress was billed for 24th of July, Local Government Congress 14th of August 2021 while sate congress was slated for September 18, 2021.