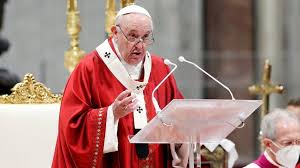 A senior Cardinal and nine others are set to face trial for alleged financial recklessness at the Vatican.

The alleged financial malfeasance was linked to the purchase of a plush property by the defendants in London.

The Italian Cardinal, Angelo Becciu, who is a close ally of Pope Francis, will appear before a tribunal on July 27.

The 73-year-old was dismissed from a powerful Vatican job last September after he was accused of siphoning charity funds to help his siblings.

The charges against Becciu include embezzlement, abuse of power, and witness tampering in the case leading to a loss-making Vatican investment in Central London under his watch.

Before his dismissal, Becciu led the Vatican’s department on sainthood.

He was also the Substitute for General Affairs, a role likened to Chief of Staff in Vatican’s central bureaucracy from 2011 to 2018.

But in a statement on Saturday, the Catholic priest insisted he is innocent.

The cardinal maintained that he had been pilloried by the media and pleaded for a chance to prove his innocence.

According to reports, the Vatican lost several million Euros on the London property and other bad investments.

Other defendants in the case are Rene Bruelhart, the Swiss former head of Financial Information Authority.

Bruelhart will face charges for abuse of power as will Enrico Crasso, an investment fund manager who controlled millions of Euros including private donations to the Church.