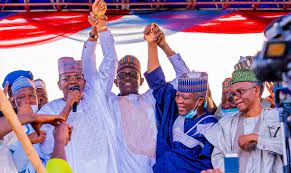 A fresh crisis is brewing in Zamfara State following the rejection of the declaration by Yobe State governor and chairman of the All Progressives Congress (APC) caretaker committee that Governor Bello Matawalle is now the leader of the party.

Buni had while receiving Matawalle into the ruling party in Gusau on Tuesday, announced the dissolution of the APC executives in Zamfara State and named Matawalle as the leader of the party.

But, while featuring on BBC Hausa Service on Thursday, a former governor of the state, Abdulaziz Yari and Senator Kabiru Garba Marafa, rejected Buni’s declaration, saying Matawalle is not the leader of the party.

The duo, who spoke after a meeting with the Kaduna State governor, Malam Nasir El-Rufai, said they would not surrender to the Matawalle leadership.

Yari said; “It’s one thing that we are challenging which is the declaration by Governor Mai Mala. His declaration was not part of what we discussed with six governors before he (Matawalle) defected.

“What we all agreed during our meeting with the six governors was that Matawalle should be received into our fold and afterwards we should discuss how to integrate both his people and ours. But during the defection, we were told that the party executives should be dissolved. You just don’t dissolve executives of a party because nobody has the power to do so,” Yari said.

On his part, Marafa said the declaration of Matawalle as the leader of the party in the state was tantamount to deception, insisting that they would not accept it.

“We said for proper integration, there should be a meeting for proper consultations but all of a sudden, announcement was made that the party executives had been dissolved and someone was named as leader of our party. This is incorrect,” he said.

Daily Trust reports that until February, Yari and Marafa were of different camps in the Zamfara State APC. The intervention by Buni ended the feud between the two political gladiators which caused APC Zamfara State in the 2019 polls.

When contacted on the issue, the Deputy National Publicity Secretary of APC, Yekini Nabena, said that the party was not aware of the development and so would not comment.