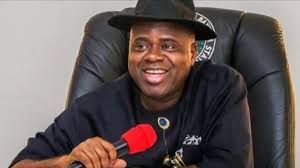 The Federal High Court, Abuja, on Monday, ordered the Federal Government to pay $951 million to the Bayelsa Government.

The amount is the 13 per cent derivative sum due as arrears of revenue and payable to the Bayelsa government.

Justice Inyang Ekwo, who delivered the judgment, held that the Attorney- General of the Federation (AGF), the sole defendant in the case, failed to enter his defence in the suit.

Justice Ekwo ruled that the development made the court declare the plaintiff’s case “unchanged.”

Ken Njemanze, SAN, filed the suit on behalf of the Bayelsa government.

The plaintiff, in the suit filed on Feb. 12, 2021, urged the court to compel the AGF to pay five per cent of $50 billion recovered as additional revenue that accrued to the Nigerian government.

The judge noted that where a person issues a letter of demand on another person upon outstanding facts, the person for whom the demand notice was issued must take steps to react to same.

“Where the person to whom such demand notice is issued takes no steps, he is deemed to have admitted the claims thereby giving the other person the option of enforcing the claims by the available procedures for enforcement of undisputed claims.

“That is what has happened in this case,” the judge held.