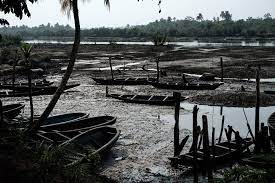 The judge ordered the oil companies to pay the money within 14 days, after which 8 percent interest would be accrued on the principal sum yearly.

The communities, which were led by Obong Effiong Archianga and nine others, had taken the NNPC, Mobil Producing Nigeria Unlimited, and ExxonMobil Corporation to court in April 2012 for oil spills in their communities between 2000 and 2010.

However, the third defendant, ExxonMobil Corporation, was later removed from the case after the court determined that it lacked a cause of action.

Justice Taiwo held that the Mobil and NNPC were negligent in the way and manner they handled oil spills that caused environmental degradation in the communities.

He knocked the NNPC for prioritizing money from oil exploration at the detriment of the lives of the people in the communities.

Although Justice Taiwo acknowledge Mobil’s assertions that it conducted a clean-up effort, he said the oil firm failed to address compensation that would have minimized the economic damages of the locals, who were primarily fishermen and farmers.

He stressed that Mobil’s oral and recorded testimony was not useful to the court because it was designed to serve a preconceived objective.

“Mobil and NNPC were both irresponsible in failing to inspect farmlands, rivers, and creeks allegedly polluted by oil leaks from their pipelines,” the judge added.

He also dismissed the NNPC argument that the complaint was statute-barred in 2012 when the aggrieved plaintiffs filed it, saying the suit dealt with basic rights that cannot be made ineffective by the statute of limitations.

He also referenced Section 11, Subsection 5 of the Oil Pipeline Act which required oil firms to monitor and maintain their pipes in order to minimize spills and environmental harm.

Justice Taiwo awarded the sum of N42.8 billion as damages for intangible losses, N29.1 billion special damages as annotated and N10 billion as general damages against the two companies.