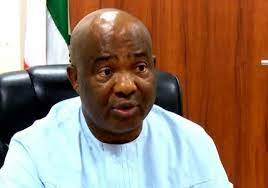 Governor Hope Uzodinma of Imo has announced the introduction of a policy that would insure the lives of personnel of the Nigerian Police Force (NPF) in the state.

Uzodinma made this disclosure during his visit to the Police Command Headquarters in Owerri, on Tuesday.

He was at the command to commiserate with the NPF over the officers who lost their lives in the recent attacks by unknown gunmen in the state.

The governor, who also presented six brand new operational security vehicles to the command, reiterated his commitment to ridding the state of all forms of crime and criminality.

He charged the officers to brace up in their game, in tackling insecurity and restoring peace and stability in the state.

Uzodinma said that a social welfare package would be launched to motivate them and enhance their individual and collective service delivery.

“I want to assure you that Imo government will not let you do this work alone. Government will partner with the Nigerian Police to ensure that our people sleep with their two eyes closed.

“I want to extend my condolences to the immediate families of those officers who lost their lives during this ugly period.

“Government is putting together a programme that will encourage the children, wives and husbands of the slain officers.

“In case of any casualty, palliative measures alone will not be provided by the government.

“Insurance companies will also take responsibility of making sure that the liabilities and obligations of those who died will be contained and taken care of through that policy, “he said.

In his remark, the state Police Commissioner, Abutu Yaro, appreciated the governor for the visit, stressing that it would boost the morale of the officers to do their best.

He stated that through the governor’s support and gallant efforts of his men, peace and normalcy had been restored to the state.

“Today, Imo is safe again and secure for businesses and social lives; we shall continue to do our best to maintain a safe state for citizens and residents of Imo State,” he said.