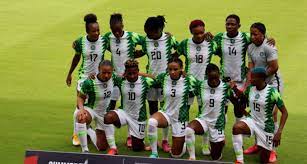 The Super Falcons played a 3-3 draw against Portugal in their second outing at the US Summer Series.

The game played early Monday morning at the BBVA Stadium in Houston Texas, saw the Nigerian ladies bounce back from their defeat against Jamaica.

Recall that the Falcons fell to a surprise loss to Jamaica in the opening game of the Seires.

But captain Asisat Oshoala, Onome Ebi, Michelle Alozie and Ifeoma Onumonu made the team ahead of Tosin Demehin, Salome Zogg, Vivian Ikechukwu and Roosa Ariyo, who were lined up in the Jamaica game.

Chidinma Okeke turned the ball into her net on 22 minutes to hand Portugal the lead before Carole Costa doubled Portugal’s lead from a free-kick in the 34th minute.

Alozie pulled a goal back for the Super Falcons just a minute to halftime but Telma Encarnação restored Portugal’s two-goal lead four minutes after the break.

Oshoala then reduced the deficit for Nigeria before Rasheedat Ajibade equalised deep into stoppage time.

The Randy Waldrum side will face hosts United States of America in their final game of the invitational tourney on Thursday.