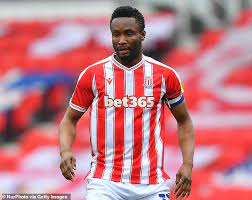 The former Chelsea midfielder, who had agreed to a contract extension at Stoke at the end of the season, changed his mind and has now penned a one-year contract with the Kuwaiti side.

The 34-year-old made 41 league and cup appearances for Stoke last season.

Speaking in a short video shortly after completing the signing, Mikel promised to give his best at the club to ensure they succeed.

“I am very happy to sign for Kuwait SC, I thank the President of Kuwait SC for the trust that he has given to me to come to Kuwait,” said Mikel

“I promise to be on my best level to help the team to make sure that together as a team we can achieve a great season next year and hopefully we can be successful”.

Kuwait SC have won the country’s topflight title not less than 15 times, with the most recent one coming in the 2018-2019 season.

They, alongside Al-Quwa Al-Jawiya of Iraq, have won the AFC Cup more than any other Asian club.