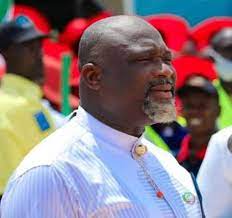 The Chairman of Emohua Local Government Area of Rivers State, Dr. Chidi Lloyd, has explained that he locked out some workers because they were late to work.

Last week, Lloyd had taken a position under a tree when he resumed last week after his swearing-in by Governor Nyesom Wike, to monitor the activities of the council workers.

On Wednesday, pictures emerged showing some workers of the council stranded by the council gate and it was gathered that the new council chairman had locked the gate at 8am.

On assumption of office, Lloyd warned that his administration would not tolerate lateness and absence.

It was gathered that the council chair, who had arrived office around 7:30am, made good his threat and locked the council gate against the staff members that did not resume office 8am.

Lloyd, on Thursday, introduced a new attendance register for the council placed at the entrance, which resulted to long queues at the gate.

However, council chair reconsidered his decision after the leadership of National Union of Local Government Employee, NULGE, pleaded with him on behalf of the late comers, who were locked out of the council secretariat.

Addressing the workers same day at the Secretariat, Lloyd tasked workers of the council to be diligent in their duty to justify their salaries, adding that the days are gone when workers who do not go to work received salaries at the end of the month.

He directed the Head of Personnel Management of the local government to issue queries to staff who come to work late, as well as those who do not come to work at all.

He said: “Gone are the days when people stay in their homes and expect salaries for the work they didn’t do.

“I understand that this has been your tradition before now, but I must tell you that we are not going to tolerate all that.

“We will not tolerate lateness to duty. We are not going to tolerate a situation where workers come to work after the local government Chairman.”

He, however, directed the Head, Personnel Management, of the council to issues queries to the affected staff members.

“We must not continue with the old ways that haven’t been helpful to the local governments.

“So, the HPM should issue queries to all those who came to work late today and let us also have the record of those who do not come to work,” he added.