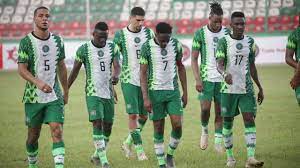 Nigeria’s Super Eagles have been ranked as the 34th best team in the world in the latest FIFA world ranking.

The rankings released on Thursday on the official website of the world’s football governing body, saw Nigeria drop seven places from their previous position.

The drop has also forced the Gernot Rohr team to lose their initial third spot in Africa as they are now fifth on the continent.

The Super Eagles recently played against the Indomitable Lions of Cameroon in a friendly game and were beaten 1-0. The home-based squad also fell 4-0 to Mexico in another friendly in the USA.

The Teranga Lions of Senegal remain Africa’s number one team and 21st in the world while Tunisia are second on the continent and occupy the 28th spot in the world.

African champions Algeria climbed 12 places to sit 30th in the world and third in Africa while Morocco climbed nine places to become 32nd in world and fourth in Africa.

In the global ranking, Belgium remain at the number one position, with Brazil sitting on second, France third, England fourth and Euro 2020 winners Italy occupying the fifth position.

Argentina, Spain, Portugal, Mexico and USA complete the top 10 in the world.

The next world ranking will be published on 16 September 2021.