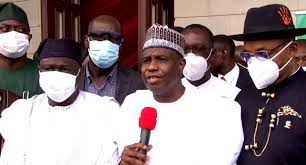 Governors of the Peoples Democratic Party (PDP) will meet on Wednesday in Abuja, to discuss the resolution of the Governor Ifeanyi Ugwuanyi–led Zoning Committee among other burning issues ahead of the October 30, 2021, National Convention.

The zoning committee is saddled with the responsibility of zoning PDP National Working Committee (NWC) offices.

The decision to zone the position of national chairman to the South is said to have divided members of the committee as it was seen as an indication that the next PDP presidential candidate would still emerge from the North.

The committee is said to have scheduled the meeting with governors as critical stakeholders in the party to brief them on the decision to avoid a major crack in the leading opposition party.

The endorsement of the report of the zoning committee by governors, the Board of Trustees (BoT), the National Assembly Caucus and other stakeholders will accelerate the work of the 279-member National Convention Organizing Committee (NCOC) chaired by Governor of Adamawa State, Ahmadu Umaru Fintiri.

The meeting of the PDP Governors’ Forum led by Governor Aminu Waziri Tambuwal of Sokoto State is also expected to discuss the Senator David Mark-led committee’s intervention in certain issues relating to the leadership challenges in the party, the convention budget, the amendment to the PDP constitution and the Electoral Act amendment among others.