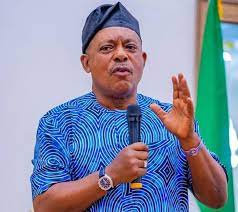 There is anxiety in the Peoples Democratic Party (PDP) as the crisis bedeviling it is worsening ahead of the party’s national convention.

The current wave of uncertainty and anxiety in the party is sequel to the decision of the embattled national chairman, Prince Uche Secondus, not to leave office in October.

Multiple sources in the party confided in our correspondent yesterday that Secondus is insisting on completing his tenure of four years, saying he would vacate office only if the party’s constitution is amended.

Secondus was elected at the December 2017 national convention of the PDP held at the Eagle Square in Abuja, along with other NWC members and his tenure of four years is supposed to end in December 2021.

But PDP expanded stakeholders’ meeting resolved barely two weeks ago, in Abuja, that Secondus’ tenure should elapse in October in order to nip in the bud the raging crisis in the party.

The meeting which had state governors, Board of Trustees (BoT) members, former ministers, former governors and National Assembly Caucus in attendance also directed Secondus to summon the National Executive Committee (NEC), which is the second highest decision-making organ of the party, to ratify processes leading to the party’s convention in October.

But sources close to Secondus revealed that Secondus has rejected the October deadline given him to leave office.

One of the sources, a foundation member of the party from the North, told our correspondent in a telephone chat yesterday that Secondus, after due consultations with some critical stakeholders, said he must complete his tenure of four years in line with the provisions of the party’s constitution.

Section 47 (1) of the PDP’s constitution states: “All National, zonal, state, local government area and ward officers of the party shall hold office for a term of four years and shall be eligible for re-election for another term and no more.

The source said: “Secondus has not agreed with that arrangement. They agreed earlier but later when he reviewed and consulted his advisers, he resolved not to agree. But he has not made it public yet.

“He is insisting that his tenure is going to expire in December, 2021, so he has seen no reasons why some people will meet and suggest that to him without any constitutional review. He said he will not agree if they don’t amend the party’s constitution.”

Another source said those plotting Secondus’ removal were not conscious of the legal implications, as Secondus has the right to go to court in the event the party’s constitution is violated.

Convention may be held in Nov

The Deputy National Publicity Secretary  of the PDP, Prince Diran Odeyemi, however, told our correspondent in a telephone chat yesterday that the NWC meeting may be held on Tuesday to reach a consensus on the matter.

He said all the NWC members including the deputy national officers of the party would meet in Abuja, to take a position and possibly fix a date for NEC meeting where their resolutions would be presented.

He said: “We should not undermine our constitution on the altar of sentiments. If they don’t want Secondus again, they should do that at the convention, if Secondus seeks a second term.  With a few months to go, it is not advisable to rock the boat.”

“Secondus has said that he would contact NEC and other stakeholders to see if they can do the convention in November. It is just a matter of few weeks. He is meeting with NWC and the deputies on Tuesday (tomorrow) and a decision would be taken and possibly fix a date for the NEC meeting,” he added.