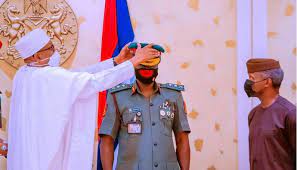 The chief of army staff was appointed on May 27 to replace Ibrahim Attahiru who died in a plane crash in Kaduna.

The brief event at the State House, Abuja, held before the start of the weekly virtual Federal Executive Council (FEC) and was attended by the chairman, Senate Committee on Army, Ali Ndume.

Meanwhile, President Buhari is currently presiding over the federal cabinet meeting at the First Lady’s Conference Room in the Presidential Villa, Abuja.

Some members of the cabinet are participating virtually from their various offices.