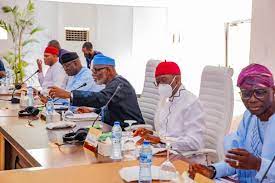 Governors of the 17 southern states have unanimously agreed that the next President of Nigeria should emerge from their region, puncturing the ambition of prominent politicians from the North.

This was the resolution of the Southern Governors’ Forum at the end of a meeting, which held at Lagos House, Alausa, on Monday.

They also resolved that the presidency of Nigeria be rotated between Southern and Northern Nigeria.

Ondo State Governor and chairman of the Forum, Arakunrun Oluwarotimi Akeredolu, reiterated the forum’s commitment to the politics of equity, fairness while while he re-affirmed their commitment to the unity of Nigeria on the pillars of justice, progress and peaceful co-existence between and amongst its people.

The Forum reviewed the security situation in the country and commended security operatives for their relentless efforts in restoring security and safety while commiserating with families and loved ones of those who have fallen in the line of duty.

Governors who attended the meeting are the Chairman of the forum and Governor of Ondo State, Rotimi Akeredolu; Dapo Abiodun of Ogun, Gboyega Oyetola of Osun State, Ifeanyi Okowa of Delta,  Nyesom Wike of Rivers; Seyi Makinde of Oyo; Kayode Fayemi of Ekiti; Douye Diri of Bayelsa,  Ifeanyi Ugwuanyi of Enugu and Emmanuel Udom of Akwa Ibom.

While the governors of Anambra and Cross River were absent, those of Edo, Imo, Abia and Ebonyi states were represented by their deputies.