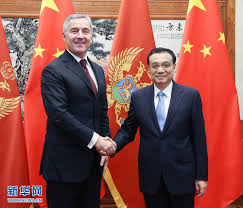 Montenegro’s government may be forced to cede a portion of the country to China after failing to repay a $1 billion loan for road construction.

Dubbed “the road to nowhere” by European media, the highway which has been under construction since 2014 leads to a mountain tunnel above a sleepy Montenegrin village.

The project is originally designed to connect the country to the Serbian capital, Belgrade.

According to a report, Chinese workers have spent six years carving tunnels through solid rock and raising concrete pillars above gorges and canyons, but the road in effect goes nowhere.

Another report noted that the China Road and Bridge Corporation, the state-owned company which is building the bridge with imported Chinese workers, has not yet finished constructing the first section of the 270-mile highway to the Serbian capital.

“The first installment on a $1 billion loan from China’s state bank is due this month but it’s unclear whether Montenegro, whose debt has soared to more than double its GDP because of the project, will be able to pay it back.

“A copy of the loan contract reviewed by NPR shows that if Montenegro is not able to repay China’s state-owned Export-Import Bank on time, the bank then has the right to seize land inside Montenegro, as long as it doesn’t belong to the military or is used for diplomatic purposes,” the report noted.

A government official told journalists Montenegro’s government may not be able to pay “the loan in this generation, but future generations.”

“But I don’t think this is a problem from China. It is our bad decision,” the official added.

European countries had expressed concerns on why China decided to loan the country such an amount when it was clear it could not repay the loan.

The amount covers 11 loan facilities received from the China Exim Bank since 2010.

However, the Federal Government has not hidden its intention to continue borrowing from China, especially for railway projects.

The German Kiel Institute for the World Economy (IfW) had in a report accused China of imposing unique conditions on borrowing nations.

These, according to the institute, give Beijing undue influence over the countries’ economic and foreign policies.

Nigerians had in 2019 expressed fears that the country would lose its sovereignty to China over bad debts.

However, the terms and conditions for which Nigeria loans were taken from China had not been made public.