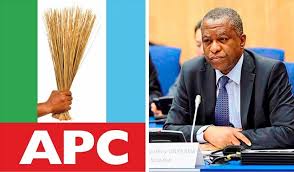 The Minister of Foreign Affairs, Geoffrey Onyeama, said on Sunday the forthcoming state congresses of the All Progressives Congress (APC) would provide the platform for the party to become competitive in Enugu State.

Onyeama stated this during a meeting of APC stakeholders from Enugu West Senatorial zone.

The minister said the state chapter of the party had passed through several challenges over the years and needed to move on in unity.

Onyeama said he was prevailed upon by APC leadership to convene the meeting as the party had largely been viewed as a huge joke in Enugu in the last six years.

He said: “This is an opportunity as stakeholders to make our input so that the path we will follow will be consensual.

“When you look at a lot of the challenges we are facing in the state, it becomes important that we are united.

“It is normal to have a personal ambition, but we also have to keep an eye on the bigger picture and make personal sacrifices by subsuming such ambition for the greater picture.

“The whole purpose of this meeting is not about self-fulfillment or aggrandizement but about service to our people. Our people are suffering and it is totally unconscionable for us to be blind to this reality.

“If we are serious for APC to be a party that will deliver to the common people, then, let us try to fashion out a roadmap that will be as inclusive and peaceful as we can possibly make it.”

A former governor of the state, Sullivan Chime, said the Enugu West Senatorial Zone would produce the next party chairman during the congress slated for August.

Chime, however, said such person must have character and integrity.