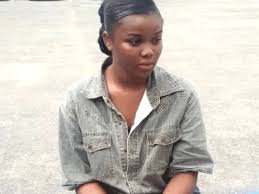 She had, according to her, taken the substance, along with ataga, and that spiked up the man’s libido and made him to start pursuing her all over the place, including around the kitchen cabinet and demanding for another round of sex, even when she was too tired.

According to the suspect, ‘roofies’ is a street lingo for rophynol. She confessed that she started taking drugs at a party she attended one year ago.

“the first time i took it, i wasn’t myself. But i continued taking it because my body later got used to it. It makes me feel high”, she added.

Asked what the drug rohypnol is used for, she said that it makes one feels high so much “you can do things you have never done before.”

During her confession, chidinma alleged that the deceased gave her ‘roofies’ about an hour before the unfortunate incident.

Peddling or using drug in nigeria is a criminal offence. In this interview, mr. Femi babafemi, director, media and advocacy, ndlea headquarters abuja, speaks on the chidinma drug issue. Excerpts:

To what extent can use of drug influence an individual to kill, using the story of Chidinma Ojukwu that she acted under the influence of drug and alcohol as case study?

First, the case you mentioned is still under investigation and until police completes its investigation, we cannot have the full picture of what happened. What we know is there has been a murder and the use of drugs was mentioned as an enabler.

What is pertinent to this question is that we have to understand that illicit drugs are mainly psychoactive substances, that is, they affect the mental state of the user, and a user under the influence of any of such substances cannot fully take full responsibility for his/her action.

Psychoactive drugs induce psychosis, a condition whereby the way the brain processes information becomes warped and the user loses touch with reality to the point that he or she begins to see, hear or believe things that are not real.

The outward signs may include anxiety, panic, impaired attention and memory. All of this leads to an inability to think clearly, and an increased risk of accidents.

Under such conditions, a user can become violent and kill. You can conjure many worst-case scenarios.

What other things can people do under the influence of drug?

One is self-harm or suicide. For example, a 400-level student of Abia State University reportedly jumped to his death from a three-storey building after using Colorado, which is a variant of cannabis.

The other things people under the influence of drugs can do are crimes generally, from prostitution to stealing to the worst of crimes, such as banditry, terrorism, cultism, kidnapping and armed robbery as we currently have in the country.

Most rescued victims of kidnapping have attested to the fact that their abductors consumed a lot of cannabis and opioids such as tramadol, and captured Boko Haram insurgents have confessed to the use of illicit drugs.

So, also, cultists apprehended have confessed to hardening their feelings and emotion by using illicit drugs. A whole lot of atrocities are committed by those who abuse illicit drugs.

We know that you go after drug peddlers. Are there sanctions for drug users?

The sanction depends on the degree of the drug offence. The National Drug Law Enforcement Agency Act stipulates that “any person who, without lawful authority, knowingly possesses or USES the drugs popularly known as cocaine, LSD, heroin or any other similar drugs by smoking, inhaling, or injecting the said drugs shall be guilty of an offence on conviction to imprisonment for a term not less than 15 years but not exceeding 25 years.”

Tell us the classifications of drugs and how dangerous they can be?

These classifications may vary depending on who is doing the classification. Illicit drugs can also be classified according to how they are controlled, such as Schedule I, Schedule II and Schedule III etc as spelt out in the three UN Conventions of 1961, 1971 and 1988.

Which drugs are mostly used by users?

In Nigeria, cannabis ranked as the No. 1 most abused substance, by 10.6 million Nigerians, followed by prescription opioids such as tramadol, codeine and morphine, used by at least 4.6 million people.

Other dangerous mixtures such as skoochies and monkey tails are also widely abused, especially by young people.

What age groups are prone to drug use?

According to research, cannabis is mostly used by those between ages 25 and 39, but most of them got introduced to the substance at age 19. So youths, generally, from age 15 are susceptible to drug use.

How rampant is the use of drugs in Nigeria?

Relying on statistics from the most recent research, the Nigeria Drug Survey 2019 or Global Drug Survey 2019, we have to admit that the use/abuse of illicit drugs is rampant, both in the urban centres and in the rural areas of the country.

For example, 10.6 million Nigerians abuse cannabis alone. If we understand that the country’s drug abuse prevalence at 14.4% is almost three times the average global prevalence of 5.5%, then we have to be honest with ourselves that drug abuse is rampant in the country.

What role is NDLEA playing in the investigation of Chidinma?

That is a murder case. The police have taken charge of it.

What efforts are you making to stem drug use in Nigeria?

We have revved up our enforcement efforts with the launch of non-stop offensive action, aimed at drug supply reduction and shutting down the supply pipeline.

We are also involved in a lot of advocacy campaigns aimed at orientating communities about the danger of the use and abuse of illicit drugs as a preventive measure that will help to keep young people away from controlled substances.

To this end, we are collaborating with a lot of FBOs, CBOs and institutions, both public and private corporations.

Tell us the results of the efforts?

So far we have had 4,896 arrests, over 500 convictions, 3,205 pending cases in court, 2million kg of illicit substances seized, over 200 hectares of cannabis farms destroyed with some methamphetamine laboratories destroyed.

These are some of the results recorded from January to May 2021. During this period, the agency has seized over N90 billion in drugs and cash.

How widespread is the use of drugs on our campuses?

Perhaps more rampant than you can imagine. For example, on Wednesday, June 15, 2021, two suspects were arrested in Abeokuta, Ogun State including a security operative who was a purveyor of illicit substances and was the supplier to students and cultists on the campus of a federal university.

He was caught with different types of illicit drugs including 17 bottles of codeine, 22grams of cannabis, 98grams of tramadol, 230, 24 grams of flunitrazepam (61 tablets), 48 grams of molly(113 tablets) and 44 grams of sex drops.

We have also the news of a 400-level student of Abia State University who, after smoking a variant of cannabis on campus, jumped to his death from a three-storey building.

Every day, we hear reported cases of cultism and, where you have such occurrences; know that abuse of illicit drugs is in the mix.