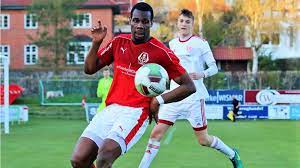 A Nigerian footballer, Kelvin Ifeanyi Igweani, has reportedly been shot dead by the police in the United Kingdom.

According to The Mirror, Igweani was killed after officers were called to an address in Denmead, Milton Kenes, on Saturday.

A sick child, who was found in the apartment, was said to have been immediately taken to hospital.

It is unclear if the deceased was involved in an argument with the cops who shot him.

The report said officers deployed a Taser before shots were fired at him.

“The man subsequently required first aid and treatment from ambulance crews but was pronounced dead at the scene,” Thames Valley Police said.

The Police Conduct said it had received a referral from TVP, stressing that a probe is underway.

“The Independent Office for Police Conduct (IOPC) confirmed it had received a referral from TVP and said its investigation was “at a very early stage and no further information can be provided at this time.

“Police described the incident as ‘absolutely tragic’ and said their thoughts are with those who had been affected.

“Our thoughts are with all those affected by this tragic incident.”

TVP assistant chief constable Christian Bunt, said: “What has happened this morning can only be described as absolutely tragic and will no doubt have an impact on the community.

Meanwhile, Igweani’s next of kin has been notified and officers are likely to remain on watch outside the property for several days, according to Police.

Igweani, a striker, made a debut for FC Anker Wismar in January 2018.

He attended MKDONS set FC/Leon College Simpson, England between 2015 and 2016.