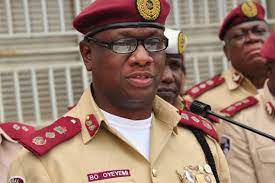 A report by the Federal Road Safety Corps (FRSC) has revealed that a total of 2,233 Nigerians lost their lives in multiple road accidents across the country in the first four months of 2021.

The Corps Marshal of the FRSC, Boboye Oyeyemi, in a virtual event to mark the fifth edition of the Babatunde Raji Fashola ‘GabFest’, with the theme ‘Arrive Alive: Building a Road Towards Better Driving Culture’, on Monday, gave a breakdown of the road crashes with the death toll coming from 4,459 accidents involving 28,826 persons.

The figures, according to Oyeyemi, showed that 691 Nigerians died in January, 497 in February, 480 in March and 565 in April, from the accidents.

Oyeyemi identified over-speeding as the major cause of accidents in Nigeria, adding that aged cars on bad roads also contributed to the high level of accidents.

“There are more road users on the road, reasons for high rate of accidents in January and April. The way at which we are experiencing road crashes that resulted in fatalities is alarming while the absence of toll plazas has made enforcement to be a bit difficult.

“When there are toll plazas, we will be able to track those speeding above the speed limit,” the Corps Marshal said.

However, the Minister of Works and Housing, Babatunde Fashola, disageeed with Oyeyemi on the causes of the frequent accidents on Nigerian roads, saying bad roads should not be blamed for accidents, but those behind the wheels.

“If you can speed on that bad road and your car is vibrating very badly and you continue, the next question to ask yourself is, are you a good driver?

“While we are chasing malaria and COVID-19 as we should, the silent killer is going away and undetected,” the former Lagos State Governor said.