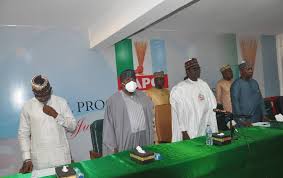 The Caretaker Committee And Extra-Ordinary Convention Planning Committee of the All Progressives Congress (APC) will get another six months extension, according to sources.

The committee was put together on June 25, 2020, following the sack of Comrade Adams Oshiomhole, National Chairman of the party, by a court.

It had the mandate to stabilise the party and organise a convention to usher in a new National Working Committee (NWC) of the ruling party within six months.

However, its tenure was extended by six months.

Top party sources and lawmakers told Daily Trust that the tenure of the committee would be extended by another six months next week.

A chieftain of the APC, Chief Jackson Lekan Ojo, also confirmed that the timeline of the committee would be extended by six months.

“They have already extended their timeline by six months internally. They are trying to see if they can resolve some internal wrangling,” he told Daily Trust.

Below is a full list of members of the committee

Celebrity Gist admin - September 14, 2022
0
The atmosphere in Abia, God's own state is charged and young people are excited as one of their greatest exports and And Ambassador, Dr....