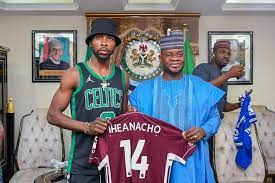 Leicester City ‘Seniorman’ and Super Eagles striker, Kelechi Iheanacho has described the governor of Kogi State, Yahaya Bello as an inspiration and rallying point for the youths in Nigeria.

The FA cup winner disclosed this on Thursday during his courtesy visit to the governor in Abuja.

“Your Excellency, I’m highly honoured to be received by you this afternoon. I have heard a lots about you and I’m equally educated about your achievement in Kogi State during this visit.

“I commend your effort despite the challenges on your table to have made yourself as the rallying point for the youths of this country.

“It is difficult to find a leader who was ready to bring the youth of the country into governance the way you are doing in Kogi State.”

Iheanacho also commended Governor Bello for honouring the Ex-Super Eagles in Lokoja sometimes ago.
“Such honour remains huge source of motivation and inspiration to young athletes in Nigeria and beyond,” he said.

In his remarks, the Kogi Governor congratulated the player for his achievements and most importantly in making Nigeria great by playing for the Super Eagles unlike others who after finding their foots on foreign soil decided to remain there.

“You mustn’t be a politician to contribute to the development of this country. By not hiding your identity and as a multitalented player who come from Nigeria, you earned respect from both blacks and the whites across the world. You have a voice and followers.

This is the time for the youth to come together and have their voices heard. I congratulate you once again on your numerous achievements at club level,” he said.