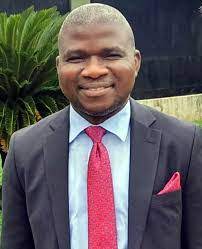 Terver Akase, spokesman of Governor Samuel Ortom of Benue State, is among the six gubernatorial aspirants of the Peoples Democratic Party (PDP) that the governor unveiled for the 2023 elections on Sunday.

Ortom introduced the aspirants at the JS Tarka Institute of Political Studies, Gboko, during the defection of notable Benue politicians, Joseph Kaaba, Francis Kwaghgba, and their teeming supporters from the All Progressives Congress (APC) to the PDP.
Aside Akase, other aspirants Ortom introduced were: Speaker of the Benue State House of Assembly, Titus Uba, Dr Paul Ubwa, Engineer Dondu Ahire, Dr Robert Orya, and commissioner of Education, Professor Dennis Ityavyar.
The governor said there other PDP gubernatorial aspirants were unavoidably absent at the event.
He urged the State PDP Chairman, Sir John Ngbede, to convene a meeting with all gubernatorial aspirants and advised the governorship hopefuls to work as a team, considering the fact that only one person would occupy the seat in 2023.
He promised to work closely with stakeholders of the party to produce a consensus governorship candidate.
Ortom added that where the idea of a consensus candidate fails, the decision would be made at the party primary election which he emphasised would be free and fair.
He, however, assured those defecting from APC to the PDP of equal opportunities and internal democracy.
Ortom expressed optimism that the party would regain power at the national level in 2023.
Speaking, the State Chairman of PDP described the APC as a sinking ship and urged the people of Benue to join the PDP.
On his part, the chairman of the defection ceremony, Chief Terngu Tsegba, and the Executive Chairman of Gboko Local Government Council, James Kachina, acknowledged the “people oriented projects” executed in Gboko by the Ortom administration, stressing that the people had justification to remain in PDP.
Joseph Kaaba, who spoke on behalf of the defectors, said they were happy with the good works of the governor and decided to join forces with him and other PDP faithful to provide dividends of democracy to the people.