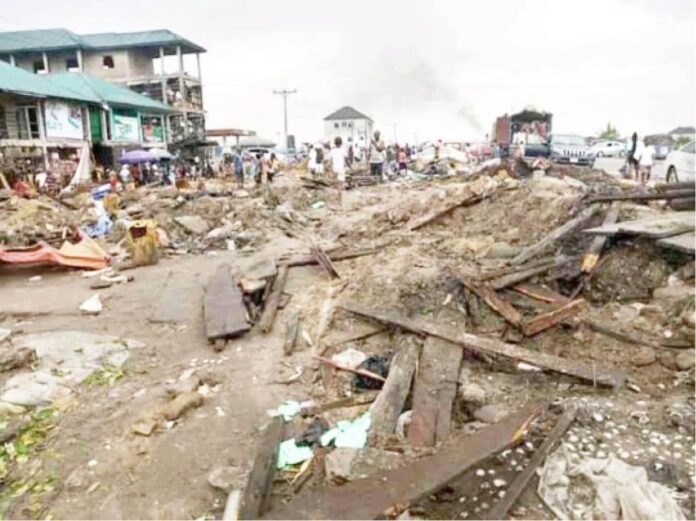 Property owners in Yenagoa, the Bayelsa State capital, have continued to groan over recent demolition of “illegal structures” across the town by the state government. They are accusing the government of being selective in its approach for the exercise.

Mostly affected in the ongoing exercise are traders across various markets. The traders’ union in the state claimed that over 10,000 of its members had been displaced and their goods destroyed in the process.

Some shops in Swali and Kpansia markets were demolished while traders at the Tombia/Etekwe junction were evacuated by the government, which claimed there was no provision for a market at that location.

Also, illegal structures at Opolo and other communities have been removed and traders sent away.

Across the streets of the state capital, government said it brought down many structures to pave way for development.

Since assumption of office on February 14, 2020, Governor Douye Diri has intensively embarked on urban development projects, a situation that has led to the demolition of many structures said to have been built against the state’s development plan.

Although many people whose structures were affected in the demolition exercise claimed they were being witch-hunted for not supporting the Peoples Democratic Party (PDP) and its candidate, Diri, during the 2019 governorship election in the state, the Commissioner for Information and Strategy, Ayibaina Duba, said the exercise was purely for development and devoid of any political sentiment.

The governor has successfully curtailed street trading in the popular Tombia junction, which is the gateway to the state capital and remodelled and beautified the roundabout. The Phone Village was also demolished last year to pave way for new structures.

Already, businesswomen under the aegis of the Association of Women in Micro, Small and Medium Enterprises, said they would soon hit the streets of Yenagoa to protest what they described as destruction of their sources of livelihood by the state government in the name of urban renewal policy.

The coordinator of the group in the state, Mrs Peace Oruama, said the women were not against the urban renewal policy of the government, but a situation where all the places they plied their trading had been destroyed without an alternative was unacceptable.

They also faulted the claim by the state government that there were over 600 locked up stores at the Swali Ultra Modern Market where displaced traders could relocate to. They noted that the said vacancies at Swali were stores with open roofs and in swampy areas that could not be assessed by customers when it rained.

She said, “It is very annoying that government refused to provide an alternative before the demolition. And they have asked all market women and men to leave the ‘Illegal sites.’

“An alternative would have been the best solution. On a daily basis, our mothers and sisters go to look for their daily bread. They don’t have any other job. Most of the traders you see in the market are graduates, but there’s no job.

“Now, you are telling them to leave the market; to go to where? The Swali market they are talking about is not even up to a local government standard, let alone, state.

“Go to that market and you would discover that it is commissioners and directors that have the shops. They would sublet the shops to the less privileged women in a higher price. How can they afford such shops? That’s why they go to those places where they can sell to feed their families.

“So, it is very annoying. It is like a straight bullet to a woman and her entire family. No woman will sit down and watch her children starve under this recession caused by the COVID-19 pandemic.”

The chairman of Okutukutu, Tombia/Etekwe junction market, which was demolished, Alhaji Dahiru Ya’u KT, said they had been doing business in the location right from the time of the first civilian governor of the state, the late Chief Diepreye Alamieyesiegha.

He said though they were in support of the state government’s urban remodelling projects, it should be noted that traders were struggling to fend for their families, and therefore, should not be chased out of business. He added that rather than destroy the means of livelihood of the poor masses, there was the need to curtail the level of poverty and hardship in the state.

He said; “When the first civilian governor of the state, Alamieyesiegha, wanted to relocate Oyoyo market to Swali, we met him and pleaded for Tombia junction market. We are also pleading with the government to help us with a new location. We know this road leads to the airport, but government should ensure that thousands of people doing business here are not forced to the labour market.

“This market is made up of both indigenes and non-indigenes. We like the development that government is bringing to Bayelsa State, but they should also consider the plight of petty traders.

“We want the government to evacuate traders to a stipulated place and give them boundary, rather than removing them from where they are making money to feed their families.

“Government is acting beyond the agreement they had with traders. Let them provide another place for us to do business, even if it is temporarily.”

Also, Balalate Ingifa, an indigene of Bayelsa State who resides around the demolished market, said it was an ugly situation as over 6,000 traders were displaced at Tombia Market. To worsen the situation, according to him, goods belonging to traders, mostly aged women, were destroyed by task force on a daily basis

A shop owner at the market, Godwin Abraham, lamented that the demolition team of the state government sealed his shop for more than two weeks, during which he lost perishable goods.

“The major problem here is that people were trading on the road, but the annoying thing is that those of us who own shops are also affected. Our shops have been sealed for more than two weeks with goods inside; and most of those goods are perishable,” he lamented.

Mr Izibefien Sampson, the vice chairman of the Swali Ultramodern Market,  noted that the demolition of illegal structures by state government posed serious  challenge as most traders did not have where to go for now, and those who had shops now carry goods on their heads.

Reacting, the Commissioner for Information and Strategy in the state, Ayibaina Duba, said the urban renewal drive of the state government was not only directed at markets but any illegal structure that hampered development.

He denied the insinuation that the demolition was targeted at the opposition, saying Governor Diri was determined to make Yenagoa a modern state capital.

He said, “There is no designated market at Etekwe/Tombia roundabout, from 1996 till date. What you see there is that people just woke up one day and decided to turn a community to a market. So, as far as the state government is concerned, there is no market there.”