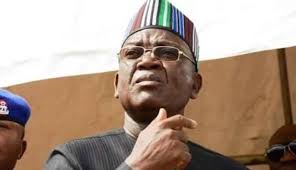 Governor Samuel Ortom of Benue state yesterday said the state is currently facing the worst humanitarian crisis in recent time with over 1.5 million Internally Displaced Persons, IDPs, arising from ceaseless attacks on communities in the state by armed herdsmen.

He lamented that the government had been overwhelmed and unable to cope with the situation and urgently needed help to to cater for the needs of the IDPs.

The Governor who spoke during a live broadcast and interactive session with newsmen in Makurdi to mark the June 12 Democracy Day celebration urged the federal government to live up to its responsibilities by supporting the state to cater for the needs of the IDPs.

According to the Governor, the recent attacks on communities in Ado, Katsina-Ala, Gwer West and Agatu had further aggravated the situation and appealed to spirited individuals and organizations to come to the aid of the state.

He regretted that the federal government had turned its back on Benue state and refused to support or assist the state as required by law warning that the development was also taking its toll on food production in the state.

He said, “the challenge is overwhelming and we cannot cope, it is the worst humanitarian crisis in recent time and it is taking its toll on the state already.

“At the moment the state is facing a looming food crisis with the people fleeing from their ancestral land to IDPs camps and unable to farm to produce food.

“What that means is that the ‘Food Basket’ state will not be able to produce to feed its populace and other parts of the country. That is the implication of what is happening, it will obviously affected security in this country,” the Governor said.