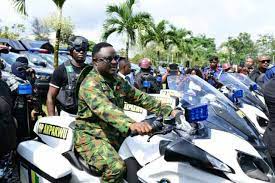 The Cross River State security outfit, Operation Akpakwu, a combination of police, Nigeria Security and Civil Defence and DSS conducted what they described as “Operation show of force” throughout much of Saturday morning.

They paraded most black spots of Calabar South LGA and those of Calabar Municipality with long convoys of armed personnel.

They also blocked many areas of Calabar South, including the popular Watt market, Anantigha and Mbukpa roads.

Men of the Nigeria Police Force were also seen deployed in strategic places in Calabar.

Yesterday the state governor Prof Ben Ayade had issued stern warning against any public procession or protest in the name of June 12.

Coordinator of Operation Apakwu, Alfred Mboto said the government was not taking chances even if Calabar or other parts of the state were thought to be calm.

But motorists, commercial drivers and suspected area boys have frowned at the government blockade of many roads.

They said the government was attempting to provoke them by debarring them from their legitimate livelihoods.