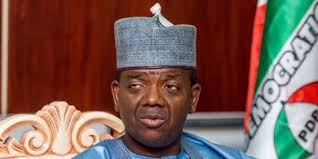 Zamfara governor Bello Matawalle has suspended the Emir of Zurmi, Atiku Muhammad, on allegations the traditional ruler is involved in the spate of killings in Zurmi.

It comes two weeks after the Emir of Dansadau Alhaji Hussaini Umar was suspended for a similar reason.

The Bunun Kanwa, Bello Suleiman, has been named to take charge of affairs of the Emirate immediately, according to a statement signed by the acting secretary to the state government Kabiru Balarabe.

“In the meantime, His Excellency has also approved the constitution of a high powered Committee to investigate allegations made against the suspended Emir, on his involvement in the escalating rate of banditry attacks in the Emirate,” the statement said.

Totalnews is your news, entertainment, music fashion website. We provide you with the latest breaking news and videos straight from the entertainment industry.
Contact us: [email protected]totalnews.ng
© Theme by TotalNews
MORE STORIES