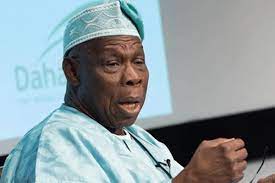 Former President Olusegun Obasanjo has met the Beninese President, Patrice Talon, in a bid to get a soft landing for the self-professed Yoruba freedom fighter, Sunday Adeyemo aka Sunday Igboho, who is standing trial in the country, TheCable reports.

Igboho, who was arrested in Cotonou over two weeks ago, is standing trial for alleged illegal possession of a Beninese passport and other charges at a court in the tiny West African nation.

The Department of State Service (DSS) had on July 1 declared the activist wanted over alleged illegal possession of seven AK-47 rifles and 5000 rounds of ammunition among others following raid on his Ibadan, Oyo State, home.

Diplomatic sources told the online platform that Obasanjo travelled to Zanzibar, an island in Tanzania, on August 1 and rerouted to the Benin Republic.

The ex-President, according to the sources, travelled to the Benin Republic under the guise of condoling with the country’s former leader, Nicephore Soglo, who lost his wife recently.

The duo had maintained a very cordial relationship over the years.

“Former President Obasanjo travelled to Zanzibar on August 1, perhaps to conceal his trip; he rerouted to Benin Republic.

“He was to condole with former President Soglo who recently lost his wife,” one of the sources said.

Another source confirmed that Obasanjo asked the Benin Republic government to grant asylum to Igboho in the country.

“He (Obasanjo) met with Patrice Talon. The purpose of the meeting was to seek soft-landing for Sunday Igboho.

“He’s asking the Beninese authorities to grant the separatist leader asylum, and not to return him to Nigeria.

“The former President intervened at the request of some South-West leaders,” he stated