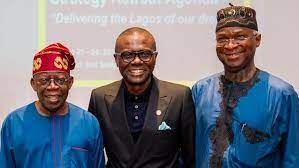 The Lagos House of Assembly has amended the state Pension Law for former governors and other political office holders, reducing their benefits and emoluments by 50 percent.

The House approved the recommendations sequel to the presentation of the report by the chairman of the House Committee on Establishment, Training and Pension, Yinka Ogundimu, during plenary.

Ogundimu, representing Agege II, said the committee reduced their benefits and other emoluments by 50 per cent, based on the present economic situations of the state.

The lawmaker added that it had expunged the provision of houses in Abuja and Lagos for former governors, as stipulated in an earlier law operated by the state.

He said that the committee report presented to the House further showed a reduction in the number of vehicles to be made available to former governors and their deputies.

The Speaker, Mudashiru Obasa, however, suggested that the former governors should get two vehicles (a car and a van) instead of the three recommended by the committee.

Obasa also said the amended bill should provide that the cars be changed every four years instead of the three years recommended by the report.

He said that the reduction should be left at 50 per cent, especially as the report had recommended the removal of houses and reduced other benefits.

The speaker recalled the recent murder of the President of Haiti, saying it was necessary to also secure the lives of the former office holders.

“By virtue of my office, I have seen former speakers who we just had to intervene in their lives because of the situations they found themselves outside office. We have also seen former governors in very bad situations.

“However, we must realise that this is democracy, and it is all about the people. We are here because of the people. When we represent people, it is good for us to listen to them as well.

“We must realise that we will always go back to the people for support. So, when we hearken to their agitations and reduce what existed, it shows that we listen,” he said.

Earlier, some of the lawmakers had supported the report of the committee saying it would have a positive impact on the internally generated revenue of the state.

The House on May 25, passed into the second readings, the bill seeking to repeal the law which grants pension and other emoluments to former governors and deputies.

However, some lawmakers had argued that it would not be too good to repeal the law in its entirety, as there were some important sections and stipulations that should be considered.

The ex-governors of the state who are presently benefitting from the jumbo pensions include Asiwaju Bola Tinubu, Babatunde Fashola, and Akinwumi Ambode.

The Lagos State Governor and Deputy Governor Pensions Law of 2007, provides that “the former governor is entitled to six new cars every three years and a house in Lagos and another in Abuja.

“Conservatively, a house in Lagos will cost N750 million and one in Abuja N1 billion. The former governor and family (spouse and children ─ both married and unmarried) are entitled to free medical which is not capped.

“Another highlight is that the ex-governor is entitled to a cook, steward, gardener, and other domestic staff, who are pensionable.

“They are also entitled to free medical treatment for ex-governor and deputy and members of their families (not just spouses).