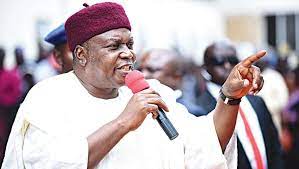 Northern governors of the Peoples Democratic Party (PDP) on Wednesday alleged that the President Muhammadu Buhari-led administration is intimidating them and other members of the opposition party to join the All Progressives Congress (APC).

According to the governors, some of their colleagues, including Ben Ayade of Cross River and Bello Matawalle of Zamfara, who recently defected to the ruling party, did so involuntarily.

The PDP governors also accused the Buhari administration of shortchanging the North despite controlling political power.

Briefing the press after a meeting of the governors in Abuja, the Governor of Taraba State, Darius Ishiaku said the development was “undemocratic and unacceptable.”

He said: “All governors of the PDP who have joined the ruling APC in recent times did so because of intimidation. Most of our members are also being intimidated persistently. We want the intimidation stopped because we are not comfortable with it.”

Also, Ishiaku said the PDP governors in the North were not satisfied with the leadership of the APC, and has made up their minds to remain in the opposition party to rescue their respective states.

”And we are drawing the attention that even though the leadership is in the North, our region is being short-changed. We want that observation to be noted.

“We the PDP governors have also resolved that, on our own, to continue to do our best for our people as we have already been doing in our various states.”

Meanwhile, the APC has described the governors’ allegation of intimidation as “laughable.”

Akpanudoehede said: “This allegation by PDP governors is laughable. Nobody is intimidating anybody to join the APC. People are coming on free will.

“The record is straight. President Buhari is too strong and his successes are so rooted that these (defecting) governors have seen and have concluded that it is better to team up with an achiever like President Buhari.

”The truth is no one is pursuing them, they are not under any threat to leave PDP. They have constitutional immunity as governors. They know they can’t be prosecuted, they left PDP on their own to consolidate.”