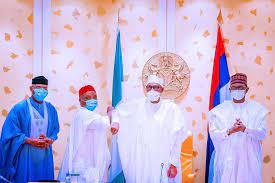 Senator Nwaoboshi was presented to the President by the Chairman of the APC Caretaker Committee and governor of Yobe State, Mai Mala Buni, at the First Lady’s Conference Room, presidential villa, Abuja.

Governor Buni alongside other members of the APC Caretaker Committee and relevant stakeholders were at the Presidential to brief the President on how they have managed the affairs of the party in the past one year.

Recall that Senator Nwaoboshi, who is the Senate Committee Chairman on the Niger Delta Development Commission, NDDC, has been having problems with the PDP in his state which culminated in his suspension.

The Senator represents the Senatorial District of the state governor Ifeanyi Okowa, who is of the PDP.