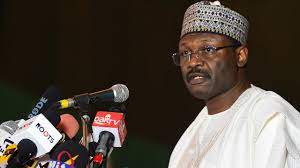 The INEC Chairman, Prof. Mahmood Yakubu, disclosed this at the commission’s second quarterly meeting with political parties in Abuja.

According to him, the 18 political parties had scheduled their primaries for the election in line with the timetable released by the commission.

Yakubu, however, refused to mention the parties that had declared their intention to take part in the election.

He said: “In the case of the FCT Area Council elections, political parties have concluded their primaries for the 68 constituencies made up of six Area Council Chairmen and 62 Councillors.

“Altogether, 14 political parties have nominated 472 candidates to vie for 68 elective positions in the FCT.

“An info graphic distribution of the nominations by Area Councils is included in your folders for this meeting.”

Yakubu urged party leaders to appeal to their candidates for peace in the Anambra governorship election, FCT Area council polls, and other by-elections coming up.

The INEC chief added: “As you are aware, a number of by-elections and major end of tenure elections are scheduled to hold before the 2023 General Election.

“This weekend, two by-elections are holding in Kaduna State for the Sabon Gari State Constituency in which five political parties are fielding candidates.

“In the Gwaram Federal Constituency in Jigawa State, 10 political parties are participating.

“We have concluded all arrangements for these by-elections, including the sensitive materials that will arrive today in the two constituencies. So far, the processes have been rancour-free.

“We urge you to appeal to your candidates and supporters to maintain the current peaceful atmosphere.

“For the outstanding by-elections, I want to assure you that as soon as vacancies are declared by the Speaker of the House of Representatives, we will release the timetable.”