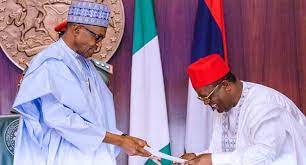 Ebonyi State Governor, Dave Umahi has defended President Muhammadu Buhari on the appointment of people from the South-East into his cabinet, adding that the President is not aware of the alleged marginalisation in the region.

Umahi who is the Chairman of the South-East Governors’ Forum, while speaking on a Channels Television programme, Politics Today on Monday, insisted that “leaders of the geopolitical zone were opposed to secessionist agitations in the part of the country,” as they were ready to meet the youths to know exactly what their grievances are.

“President Muhammadu Buhari and his ministers might not be aware of all cases of marginalisation or exclusion of Igbo people in the country.

“The President has been fair to the South-East in terms of appointments, so those saying he is not fair to the region are not saying the truth,” Umahi said.

He added that governors in the South-East would first meet with the youths in the zone on Saturday to itemise their grievances, some of which would be taken to the Federal Government and the Presidency.

“A section of South-East youths is saying that there is marginalisation, maltreatment of the people of the South-East and they want a country of theirs.

“Our position as leaders is to say, ‘who did you discuss that with? And that we are better in a united and fair Nigeria.

“So, we do not accept their position in terms of secession. But we can, as leaders, listen to them and that is what we are going to do on the 19th of this month.”

“Using the term marginalisation is not a straight-worded thing. There are issues which I explained to the wonderful honourable Minister of Defence.

“My position is that there are certain things that happen in this country that even Mr President, even the ministers, will not be aware of. When somebody from the South-East is due for promotion or a particular appointment is not appointed, how will Mr President know about it?”