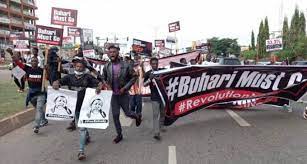 The Arewa Youth Alliance, AYA, a coalition of socio-political groups on Friday has warned the organisers of the June 12 protests to steer clear of the northern part of the country.

The coalition reiterated its resolve to protect the north and northerners from any external aggression by anti-northern forces in any guise.

A statement by the National President of AYA Mohammed Bello Doka in Maiduguri on Friday said the country was yet to recover from the destruction caused by #EndSARS protests.

“We have noticed with dismay the plan by some anti-North and Anti-Nigerian anarchists to not only heat the polity but also to destabilize the country in another effort of a smear campaign.

“Just like the #Endsars anarchy that resulted in the death and destruction of lives and property of innocent Nigerians who are doing their legitimate businesses across the southern part of the country.

“We, therefore, use this medium to call on these anarchists and merchants of sorrow, tears and blood to steer clear from the north and avoid using the said platform to harass Northerners and or Northern interest,” he said.

He equally called on the Northern brothers and sisters to dissociate themselves from the said protests which are just another antic of mischief makers and enemies of the North to smear the North and a government they perceived as Northern government.

“We assure them that this time around there will be an equal and opposite reaction from the North. We are also ready for self-determination and we are making efforts to pursue our goals without unnecessary bloodshed but as earlier pointed out we are ready for every eventuality.