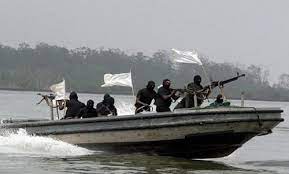 A Federal High Court sitting in Lagos, last weekend, sentenced 10 pirates to a total of 48 years each in prison under the Suppression of Piracy and Other Maritime Offences, SPOMO, Act, for hijacking a Chinese fishing vessel, FV Hai Lu Feng II, in May 2020.

Justice Ayokunle Faji convicted the defendants 12 years each on all four counts as charged. The 48 years imprisonment is however to run concurrently.

In addition to each of the convicts spending 12 years behind bars, they would also pay a cumulative fine of N10 million.

They were arraigned in July 2020 by the Office of the Attorney-General of the Federation (AGF) for allegedly hijacking the Chinese vessel in international waters off the coast of Cote D’Ivoire.

According to a statement by Osagie Edward, Assistant Director, Public Relations, at the Nigerian Maritime Administration and Safety Agency, NIMASA, the agency’s Director General, Dr. Bashir Jamoh, said that history has been made adding that a huge vacuum has been filled in the battle against maritime crimes in Nigeria and the entire Gulf of Guinea.

Jamoh was quoted to have stated: ‘‘Today history has been made, our industry has made a huge leap in the battle to rid our maritime domain of illegalities. We are not going to rest on our ours as we now have a tested legal instrument like the SPOMO ACT which is a major tool in Nigeria’s quest to end Piracy in the Gulf of Guinea”.