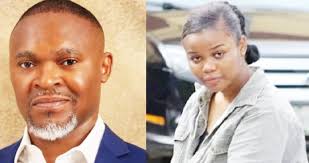 Chidinma Ojukwu, the 300-Level Mass Communication student of the University of Lagos, UNILAG, who was arrested last  Wednesday, over the murder of Chief Executive Officer, Super TV, Usifo Ataga, in a service apartment in the Lekki area of Lagos State, has revealed that she sees Usifo’s face in her dream.

This is just as more facts have emerged on how she murdered 50-year-old Usifo.

At a chance meeting with the 21-year-old lady, she said she wished she would wake up to discover that the whole drama was only a dream.

She said: “ I have never had peace since the day I was arrested. Never in my wildest imagination did I envisage I would kill a human being. I see his face in my dream every night. At times I would be scared to sleep.

“I have been begging God for forgiveness. This is not what I wanted for myself. I don’t know what fate holds for me.

“I am also begging his family to forgive me, especially his children. Ah! God, what have I done?” she exclaimed, burying her face in her palms.

While maintaining that she carried out the killing alone, Chidinma told detectives at the Homicide Section of the State Criminal Investigation and Intelligence Department, SCIID, Yaba that she was able to overpower the deceased because he was weak.

She revealed that late Usifo became weak after taking three wraps of Rohypnol while she took one wrap. She stated that she strangled Usifo before stabbing him.

Her claim has confirmed the Ataga family’s insinuation that Usifo’s neck was discovered to have been broken during an inspection of his body in the morgue.

Meanwhile, detectives are on the manhunt for a suspected drug addict and internet fraudster (names withheld), who Chidinma claimed to have assisted her to falsify the deceased’s documents after she escaped from the service apartment in Lekki Phase 1, abandoning Usifo’s lifeless body.

She disclosed that the deceased earlier gave her his Automated Teller Machine, ATM, card to withdraw some money to buy some clothes but that she did not withdraw much.

Thereafter, she said she contacted the internet fraudster to help her withdraw more money.

As at yesterday, the internet fraudster, who got wind of Chidinma’s arrest, had bolted from his abode. But the Police assured they would get him to answer questions on what he knew about Usifo’s death.

Vanguard also gathered that since Usifo’s death, his estranged wife and mother of two, Brenda, had not visited the SCIID. Vanguard was reliably informed that she would be invited for questioning, owing to information at detectives disposal.

Meanwhile, Police have beefed up security around the suspect to avoid any situation that could truncate investigation.

As at yesterday(Monday), only her father was allowed to visit her. Journalists were also barred from speaking with her.

This move, according to Police sources, was also aimed at avoiding a situation whereby any untoward incident will happen to her. For instance, her food is served by the Police, as outsiders are barred from bringing in food for her.