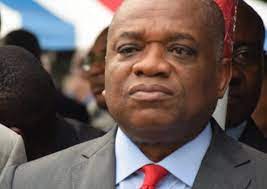 The hearing of the suit filed by Slok, a firm owned by the former governor of Abia State, Orji Uzor Kalu, against the Economic and Financial Crimes Commission (EFCC), would continue on July 13.

The firm is seeking for the court to restrain EFCC from a retrial in the alleged N7.1 billion fraud case against it and its chairman Kalu.
Justice Inyang Ekwo, who fixed the date in a ruling, also gave counsel to the plaintiff, Marvel Akpoyibo, seven days to serve his processes on the respondents.

While the anti-graft agency is the 1st respondent, Kalu and former Director of Finance in Abia, Jones Udeogu, are the 2nd and 3rd respondents respectively.

The EFCC had preferred a 36-count charge against Kalu and Udeogu in 2007.

While the former governor bagged 12 years imprisonment in December 2019, Udeogu was sentenced to 10 years in prison on December 5, 2019, however, the Supreme Court on May 8, 2020, voided the trial after an appeal was filed by Kalu’s co-defendant.

The Supreme Court had nullified the trial because Mohammed Idris, the trial judge, had no jurisdiction to hear the matter after he was elevated to the Court of Appeal.

Based on the apex court’s verdict, the EFCC, which prosecuted the case, asked the Federal High Court sitting in Abuja to transfer the corruption retrial of Kalu and others to the Lagos Division of the court.

However, Slok’s counsel, Akpoyibo, in an exparte application on Monday, June 21, told Justice Ekwo that he had a motion seeking “an Order of Prohibition prohibiting retrying” Slok.

The company, which alleged that they were being embarrassed and harassed by EFCC, urged the court to stop the EFCC from a further retrial.

Meanwhile, the ex-governor is also seeking prohibition of the retrial in a separate suit.