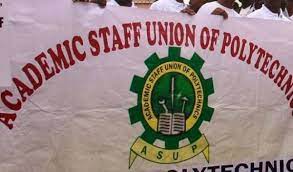 The Academic Staff Union of Polytechnics (ASUP) on Sunday threatened to resume its nationwide strike over the Federal Government’s “unsatisfactory” implementation of the agreement signed by both parties.

The union was protesting the poor state of public polytechnics and monotechnics and non-payment of 10 months’ arrears of the new minimum wage.

The union’s Publicity Secretary, Abdullahi Yalwa, said in a statement that the union discussed the report on the implementation of the Memorandum of Agreement (MoA) with the federal government during the 101st Regular meeting of its National Executive Council held at the Gateway ICT Polytechnic, Saapade, Ogun State.

According to him, the union expressed dismay at the government’s “lethargic approach” towards the implementation of some items in the MoA despite its decision to suspend the strike for three months.

The spokesman said the union would not give any warning again to the government if it fails to address its demands.

Yalwa said: “ASUP equally expressed its dismay at recent reports of infractions in the process of appointment of Principal Officers in Federal Polytechnics and some State-owned Polytechnics in disregard of extant provisions in establishment laws.

“In view of the unsatisfactory status of the implementation of the Union’s MoA signed with the government in April 2021, the Nigerian public should hold the government and its agencies responsible for any other breakdown of industrial harmony in the sector as our union and her members have shown considerable patience and restraint.

“The union once again demands that the government should without further delay ensure the release of the arrears of the Minimum Wage to staff, release the approved Revitalization Fund for the sector and set up the implementation committee to administer the funds, recommence the renegotiation of the union’s 2010 agreement and withdraw institutional accreditation to State-owned institutions where salaries are owed to staff.

“The union resolved to deepen its consultation on the next steps as there will be no further warnings if the government fails to do the needful in the immediate.”