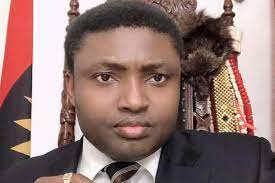 This was disclosed by a member of the proscribed organisation, Simon Ekpa, on Tuesday.

Recall that in January 2020, the group had alleged that Facebook shut down the page of its leader, Nnamdi Kanu.

The group had in a statement by its Media and Publicity Secretary, Comrade Emma Powerful, alleged that the shutting down of Mazi Kanu’s Facebook page by Facebook Nigeria is not unconnected with the fact that it has become a rich resource for people determined to expose the alleged misrule in Nigeria and the evil perpetrators of the regime that allegedly enthrone a better life for the Nigerian masses.

IPOB alleged that Facebook Nigeria is more corrupt than the regime it is allegedly protecting, adding that Biafra suffered immeasurably as a result of denial of media space in the late 60s, warning that IPOB is not prepared to allow such suffering in the present 21st century.

However, the leader of the group, Nnamdi Kanu, is currently facing 11-count charge of treason, treasonable felony, terrorism and illegal possession of firearms, among others, after he jumped bail in 2017 and left the country.

He was repatriated last month (June) from an undisclosed country by the Nigerian goverment and remanded in the Department of State Services (DSS) custody.